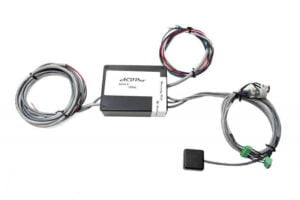 Are you looking to achieve higher performance and ability to modify response from the ACD mechanism?

This product is specifically designed for competition, and includes everything required for automatic and manual ACD operation, including an advanced hardware and software design of the custom control module in a water resistant enclosure, with a nice adjustment knob for setting the locking force, this system is infinitely adjustable between fully locked and unlocked levels.

All new units will have USB interface included and allows using ACDPro V2 application on your PC or Laptop for setup of the system.

Each control module is fully bench tested prior to shipment.

US Costumers can now purchase this product from Full Race Motorsports in Arizona (link below):

Please send us an email to info@dccdpro.com to get the latest installation guides for this product.

The hardware and firmware were designed to work together to be as “driver transparent” as possible. Our philosophy is that the less you need to adjust or monitor while driving the more you can concentrate on the road / race.

During development We considered various options including a knob to select “modes” and / or different maps but we realized the ever changing conditions of the road means modes have to be constantly changed and monitored which was opposite to our design philosophy. We spent years to design on  adaptive, formula based system that would operate in all road conditions. The control knob for the system is used to scale the ACD “aggressiveness”. Fully counter clockwise turns the unit essentially “off” which will heavily bias the rear wheels, full clockwise gives it full “aggressiveness” maximizing traction and thus increasing under-steer. In this setting the system will attempt to give you maximum traction at all times by trying to maximize the amount of ACD lock at all times. The system is infinitely variable between these two extremes. Start at lower settings (over-steer) and increase the knob setting until you find the car handles the way you would like and then the system will continue to perform in various conditions with no need of intervention.


This ACD controller constantly and frequently monitors the attached sensors, updating the ACD output based on how the car is behaving in reaction to driver inputs. It features several firmware modes that it switches between on the fly. Without going into a detailed explanation of the firmware formulas, the system automatically switches between formula appropriate for “parking lot / highway cruise”, aggressive cornering”, “aggressive straight line”, and “stuck in snow/mud” based on what information it receives from the sensors.

It monitors the output level as well as the speed at which the various sensors change. For example it can differentiate between slow gradual throttle application vs. rapid throttle acceleration and respond accordingly. The internal firmware formulas provide optimum point of operation for ACD mechanism and update it tens of times per second.


When the led illuminated switch is pressed, this controller can manually control the output to the ACD from the control knob.

The 90 day warranty is limited to the repair, replacement or refund of the purchase price to be determined upon receipt and analysis of returned product. Shipping and handling, installation and removal fees and/or damage to the vehicle will not be covered under any circumstances.

Warnings: Use at your own risk! For Off-road use only!