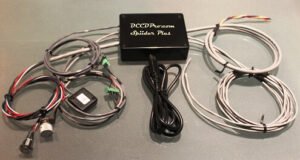 DCCDPro Spiider Plus Controller (Universal Plus) is a dual processor intelligent DCCD controller with direct dual wheel speed sense. The dedicated processor for sensing wheel slippage, on top of all the unique and powerful aspects of the Spiider (Universal) Controller, allows for a real hands free, adapting capability. The only DCCD controller in the world with dual processor, is specially important, as one being assigned to comparing/analysis of wheel speeds directly from the ABS wheel sensors rather than an inaccurate reading from single sensor input. The system is integrated in a single box (IP65) for easy installation and less wiring. This unit includes all parts needed for DCCD operation and is independent of ECU or ABS ECM. The system does not need any part of ABS system except the two wheel speed sensors to operate. It is fully programmable through USB port (included) using our free application.

The hardware and firmware were designed to work together to be as “driver transparent” as possible. Our philosophy is that the less you need to adjust or monitor while driving the more you can concentrate on the road and your race.

This DCCD controller constantly and frequently monitors the attached sensors, wheel speeds updating the DCCD output based on how the car is behaving in reaction to driver inputs. It features several adaptive firmware modes that it switches between on the fly. Without going into a detailed explanation of the firmware formulas, the system automatically switches between formula appropriate for “parking lot / highway cruise”, aggressive cornering”, “aggressive straight line”, and “stuck in snow/mud” based on what information it receives from the sensors.

It monitors the output level as well as the speed at which the various sensors change. For example it can differentiate between slow gradual throttle application vs. rapid throttle acceleration and respond accordingly.

The controller features both auto and direct manual control of the DCCD. When the led illuminated switch is pressed, this controller can manually control the output to DCCD from the control knob or STi thumbwheel.

It can also be optioned with an interface to the STi DCCD display in (’07 and earlier) STi clusters to display the output level of the DCCD signal. The display will rise as power levels increase.

Warnings: Use at your own risk! For Off-road use only!